JUNE 1999
Barretts
Test pace gives hope for Higgins
SUBARU driver David Higgins has stated that a recent asphalt test has improved his Impreza by "one second per mile". The Carno-based Manxman was using the Bala Ranges venue to find some base asphalt settings for the car ahead of the SEAT Jim Clark Rally on July 3/4. This season is the first time the Barretts Motorsport run machine has used Michelin tyres and Proflex suspension. Both companies were present at the test and reported positive feedback. "It was one of the best tests I've ever had," enthused Higgins. "I was a bit worried about going onto tarmac, but with the car working this well I'm quite looking forward to the Jim Clark. "Everything worked well - we found the right suspension set-up which kept the car baIanced while not shredding the tyres. We also tried some bigger rear brakes which we'll fit to the car for the first time on the Jim Clark" The team had considered fitting the new brakes to the car for this weekend's Scottish, but with no time to test them on gravel Barretts decided to leave the car in its current gravel spec. 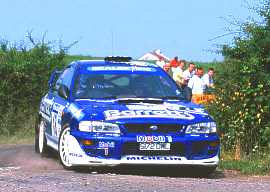 Congratulations to David Higgins and the Barretts Motorsport team on winning the Mobil 1 British Rally Championship Production Cup in their Prodrive Group N Subaru Impreza. (nice to see a result from testing on the Ranges)

JULY 1998
Prodrive
Once again this month has been a very busy one at the Ranges with a lot of teams testing for events and also testing specific components of their cars. One of the latter was Prodrive who spent 3 days testing gearboxes on a Subaru Impretza GpN.
They had four drivers up there to do 500 Kilometers, including Richard Tuthill, Terry Kaby and Gregoire de Mevius. Unfortunately on the third day one of them had a bit of an off destroying a large section of fencing, and a gate post. this in turn obviously did damage to their car so they headed back to Banbury early.

The fence and subsequent damage will hopefully be repaired this week.
This week also sees Asquith Motorsport testing there on Tuesday and Vauxhall up there on Thursday and Friday.