Here are some pictures of the lads hard at work clearing ditches and laying drainage pipes to clear away surface water, this surface water during the winter causes the tarmac to lift and break away resulting in pot holes, the fact that the tarmac is very old in places does not help.
A few of the companies that use the place for testing have complained about the holes, We have therefore implemented a repair program over the summer months, drainage ditches have been cleared and we have put down 25 tonnes of tarmac, it's amazing how much these little holes swallow, all major pothole have now been filled. The more the place is used the more money we have to fill the holes, (tarmac is better though) the more the place is used the more holes there are to fill !!!!!!!! 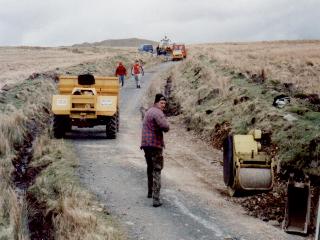 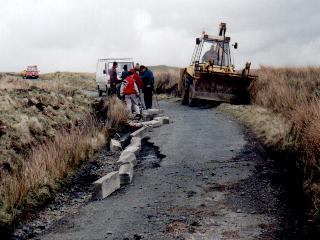 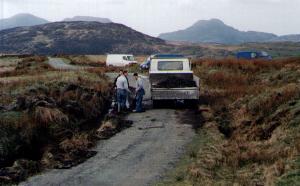 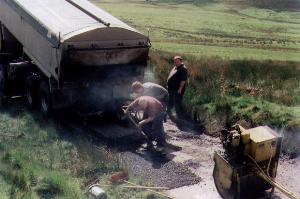 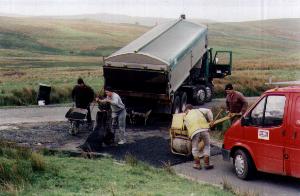 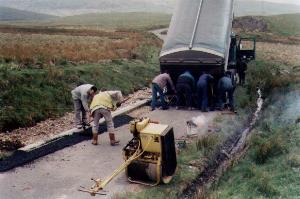 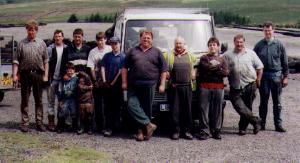 THANKS LADS !
photo does not include all the workforce but we know who you are.

During 2005 and 2006 we undertook some patching work at the venue, but it was becoming obvious that large sections of the road required full re-surfacing. Late last year the decision was taken to allocate club funds to a larger scale repair scheme, as a part of this scheme we also decided to go out and look for match funding and grants.

Many letters and e-mails were sent out seeking help. We were successful in obtaining some match funding from The Welsh Assembly Government”s Motorsport Initiative, and grant funding via The Motor Sports Association Club Development Fund. With this funding in place we were able to forge ahead with a repair programme costing £16,500.00.

Tenders were sought from local surfacing contractors, and after careful evaluation Evans Brothers, Brithdir, Dolgellau were selected to do the work. Just under 2000 square metres of tarmac has been laid, allowing approximately 650 metres of the roads to be resurfaced, together with additional works to patch and fill any remaining potholes.

The final phase of the work was completed in good time before the first rally of 2007 at the Ranges: The Clwydian Cars Stages.

We are indebted and grateful to the following for their help and support during the repair works;

•  The Welsh Assembly Government”s Motorsport Initiative, with particular thanks to Mr Allan James.

•  All Motor Clubs, Regional Associations, Rally Teams and Manufacturers who provided us with letters of support to back our grant applications.

Some pictures follow showing some before and after shots of the work.

We are continuing to look at ways of improving and repairing The Ranges, any suggestions or offers of help are always gratefully accepted.

Further to your application to the 2007 MSA Club Development Fund on behalf of the Bala and District Motor Club Ltd, I am pleased to confirm that the Fund Review Panel has approved your application for funding in the total sum of £2,500.00 towards your venue improvements planned at the Ranges Motorsport Centre, Trawsfynydd.

The Award Panel felt that your application was particularly well researched and presented, including the letters of support from neighbouring motor clubs and active competitors. We sincerely hope that our award to you will assist you to secure the additional provisional grant offered by the Welsh Assembly Government for your excellent project, and which deserves success.

With best wishes for the continuing success of your Club

Before and after photos

Repairs 2012
More ashphalt has been laid for the forthcoming stages, that sumpguard scraping bit before the triangle has been leveled off. 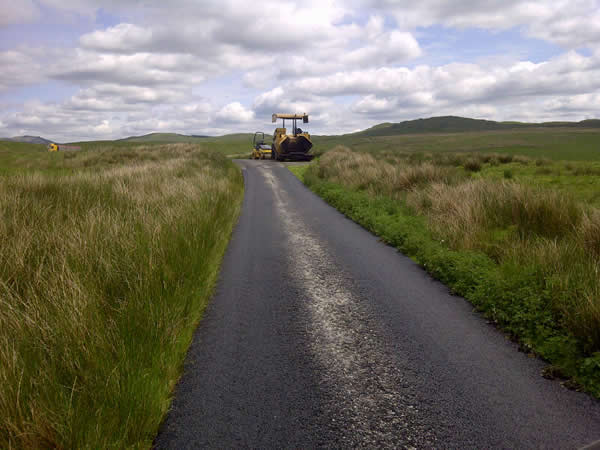 The sunken sides of the road have been filled in 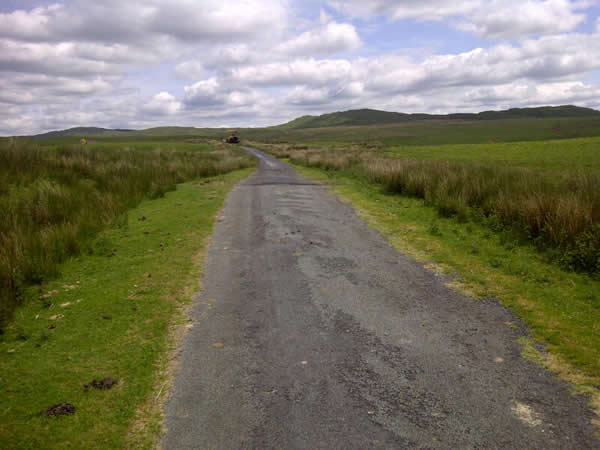 Bala and District Motor Club invests in the future of venue

Having secured a renewed lease of 25 years at the Ranges Motor Sports Centre at Bronaber, Trawsfynydd, Bala and District Motor Club have just completed another phase of improvements at the venue at a cost of £9800
Over the summer of 2015 motor club members filled in pot holes around the venue and 600 metres of ditches were re-opened to facilitate better surface water drainage which has paid dividends having regard to the severe rainfall over winter. However the main aspect of the project was completed this week with the re-surfacing of 240 metres of the road at the venue; this being a continuation of the club’s investment of over £30,000 on improvements at the venue over the last 10 years.
A spokesman for the club commented that it is important to maintain the venue for future years both for rallies, testing and other club events such as Production Car Autotests, this being the grass roots of motor sports facilitating cheap entry level motor sport for entrants of upwards of 14 years of age. The improved surface will also provide a better surface for rally car testing by private teams, with the revenue raised from testing being continually re-invested in the venue.
The work would not be possible without the help of The Motor Sports Association / British Motor Sports Training Trust Club Development fund with grant aid of £5400 being secured to help finance the work.
This year will see 4 Production Car Autotests, 1 Stage Rally, The Minafon Garage Gareth Hall Memorial Rally, a test as a part of The Three Castles Classic Rally and possibly a Targa Rally being held at the venue.
Bala and District Motor Club would like to thank Mr Allan Dean-Lewis of The Motor Sports Association / British Motor Sports Trainig Trust, John Roberts ( Ffestiniog) Plant Hire, A & M Lloyd and Hunter and Lewis Road Surfacing for all their assistance with this project.