The Ranges is an area of a Welsh mountain side that was use by the army as a tank firing range, they built an area about the size of large football field with an access road running across the mountain, and the odd track running to a few gun emplacements, most of these tracks have now disappeared, but the road and central area still exist.
After the army had finished with the place it was purchased by Harris Brushes who used the place as an area for drying pig hair, used in their range of brushes, it is still know locally as "Blew Moch" pig hair, with introduction of man made fibres the place reverted back to its natural state and became the property of a local farmer.
The place was then used for a few years as a rally school by Ian Hughes, and the motorclub held closed to club events there, the odd hillclimb, autotest and sprint.

Panic on the Ranges

In the late eighties a couple of club members decided to try and run a small event there utilizing the road over the mountain, with a bit of ingenuity they created a 22 mile 12 stage event, all though not all 12 stages were run as the weather took a turn for the worst and the event was stopped due to the access bridge being under 2 feet of water and large standing puddles making driving hazadours to say they least, but the event was a huge success and a means of continuing had to be found

This resulted in the formation of the Ranges Motorsport Centre

THE thrills and spills of top-class rally driving arrived in Gwynedd yesterday with the opening of a new tarmac rally centre.
The Ranges Motorsport Centre at Bronaber, Trawsfnydd, has been created by the enthusiasm of the Bala and District Motor Club.
It will be used as a training school to improve the driving skills of Britain's rising young rally stars.
Yesterday 50 drivers and Co- drivers from the Peugeot GTI Rally Club were the first to test the track in difficult wet and slippery conditions. Funding for the brand.new venture has come from the Sports Council of Wales, the Mid-Wales Development Board and Bala Town Council. At the opening ceremony, founder member of the club Bala mayor Dilwyn Thomas Jones accepted a cheque for £8,000 from the sports council.
The two-mile section of road, formerly part of an Army range, has been completely resurfaced as a result of the grants and is considered to be typical of the type of tarmac special tests encountered on many major British rallies. This new venue will be used for club rally events as well as training drivers belonging to big companies like Peugeot.

Peugeot Talbot Motorsport director Des O'Dell has warmly welcomed the opening of the new rally training track. "If British crews are to stand a fair chance of competing at top level, they must have some where to train," he said. "The sports council and Bala Town Council are to be congratulated on recognising the need and doing something about it"

THE Peugeot GTI Rally Club will be the first to benefit from Bala MC's new tarmac venue this week when it spends two days training 50 of its Club members in the art of tarmac driving and pace note etiquette. Bala MC has spent 18 months negotiating a 25 year lease to use the isolated two mile stretch of road which is owned by a local farmer. Financed by a £8,000 grant from the Sports Council of Wales, and with support from Bala Town Council, the road has been completely resurfaced. Situated off the A470 on an old army range near Trawsfynydd the fast and open venue has been compared to Epynt, and is similarly open to the elements. It will be officially opened by the Lord Mayor of Bala, himself a founder member of Bala MC, on Thursday, while Peugeot will stay there for further training on Friday. Chairman of Bala MC Mr. Edwyn Evans explained that although the terms of the lease prevent private testing on the venue, it holds great potential for varied training exercises, while single venue tarmac events of around 25 miles will also be feasible. 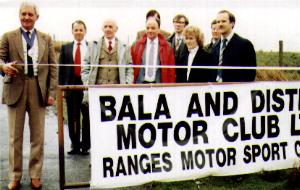