The Pk Memorial is a Road Rally run by the club in memory of one of its earlier members John Gwynne Williams or as he was known by everyone PK .
Gwynne was a keen motorsport fan, his passion was Triumph cars, he regularly road rallied a TR4a during the 60's then turned to the 2000 2500pi range in which he competed in several international events including the Welsh rally in 1964

Obituary    (from club magazine)
Gwynne Williams was one of the earlier members of the Bala and District Motor Club. At that time most members were involved with motor cycle events, but on his return to Bala from Liverpool Technical College, Gwynne immediately started the interest in motor cars.
He was a gifted driver and was always ready to experiment and try something different. He once took a gas fueled car out on a rally but the cold weather caused the regulator to freeze in the middle of Clocaenog.
He initially rallied MG's of various descriptions before turning his attention to Triumphs. His greatest successes were in the TR4, but when most other competitors went in favour of the Mini, Gwynne turned his attention to Triumph, 2000 and later 2.5PI.
He will best be remembered for giving a lot of local club members the opportunity to start navigating, a factor that did not help him get good results more often than not. It is said that if he had a good navigator his results would have been much better.
The Motor Club was his main interest and he was an honorary member. He held office in the club and will be sadly missed.

We are indebted to Mrs Gwyneth Williams for presenting to the Club a beautiful silver cup in memory of her late husband Gwynne. He had been a long and faithful member of the Club and a successful rally driver during the 1960's. The cup was shown to the Committee members at its last meeting where considerable discussion took place regarding how the Cup should be used

In the end the decision was unanimous. The club will promote a road rally towards the end of the year, a date is yet to be fixed, and the Cup will become a Perpetual Trophy to the winning driver. The event, in all probability will be called "The PK Memorial Rally" 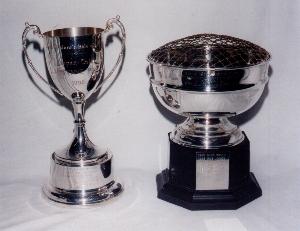