The town of Bala is situated on the shore of the largest natural lake in Wales, LLyn Tegid (Lake Tegid - literal translation) hence the clubs newsletter Tegid Times
It first appeared in the early sixty's, it's creator was Mr. Wynne Foulds and was then a single sheet of foolscap paper run off on a duplicator.
There have been several editors over the years, with the occasional break in production when no one could be found to produce it.
It generally consisted of a few photocopied sheets of local news, events & results etc,
It was produced by Edwyn Evans (then club secretary) for several years, some of his articles and reports can be seen elsewhere on this site
It is now however, published by Arwel Jones in a small magazine format and consists of several pages of news and gossip, with the emphasis on gossip, it helps to have a sense of humour and a thick skin to be a member of Bala MC these days.
It hasn't appeared for several months now, but we are expecting a bumper issue some time soon !!!!!!!!!   maybe we should call it the Tegid Times Annual ? 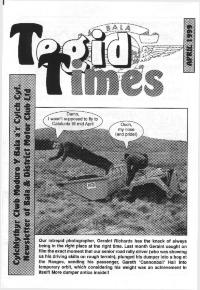 Tegid Times now has a new editor. (2009)
Emyr Hall produces a quarterly bulletin, this is emailed in PDF format to members no hard copy is produced.
It is also made available on the members page on the web site.